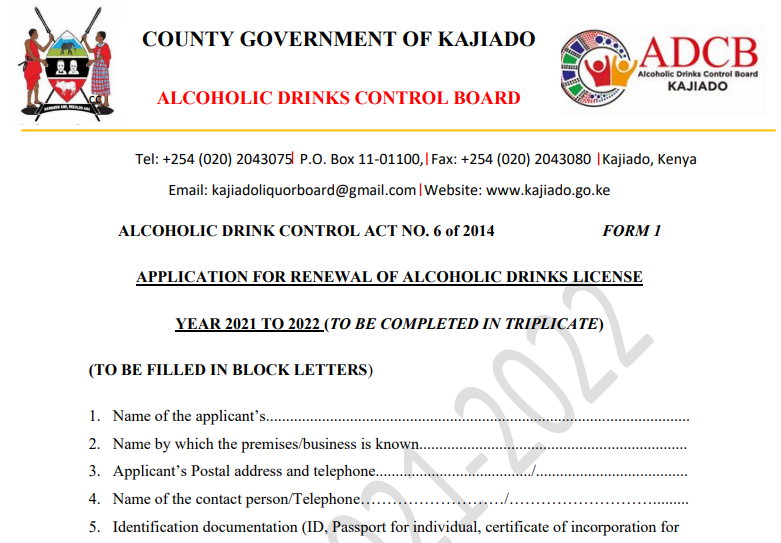 REPRIEVE FOR BAR AND RESTAURANTS

Having considered the job losses and economic struggles being experienced by traders in the Bars and Restaurants sector, Governor Joseph Ole Lenku has announced a raft of changes that include waivers and increase in operational hours.

He has DIRECTED that;

(ii) All the application fees payable to the County Alcoholic Drinks Control Board be suspended for the 2021/22 Financial Year.

(iii) Licences falling under the same department be harmonized and merged for ease of payment and administration.

(iv) The Kajiado County Alcoholic Drinks Control Act (2014), be amended to provide for board membership to include representatives of Bar and Restaurant Owners from each of the Sub Counties.

He said the move is meant to assist the business community in the Food and Entertainment Industry in their recovery process from the COVID 19 pandemic.

He added that it will also help them to retain their current staff and recall those who may have lost their jobs. 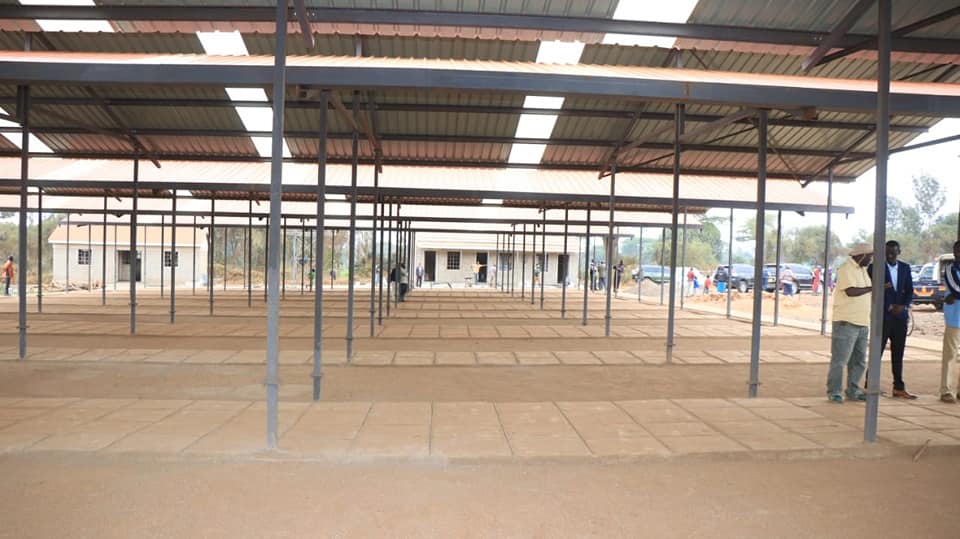 A TOUR OF OLOITOKITOK TOWN

The landscape of Oloitokitok town is destined for a total transformation when my urban centres upgrading programme is finally completed.

H.E the Governor has inspected the ongoing cabrol works in the town as well as the ongoing construction of Ilasit Market.

The integrated market which is nearing completion sits on a 9- acre County Government land and will hold 500 traders.

A link road from Ilasit town centre to the market is also being constructed to ease transportation of goods and people.The market will also have a livestock sale yard.

The Governor’s vision to make our urban centres friendly trading hubs is on course. 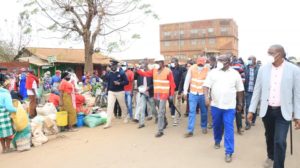 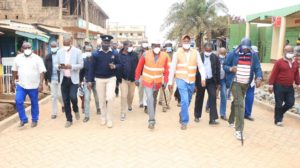 The Department of Roads and Public Works has  moved to clear the ground for the start of the construction of the new Kitengela Market.
Today was the end of the grace period granted by a Kajiado Court to the traders to peacefully relocate to a new site at the local stadium to pave way for the construction of the ultra-modern market.
Roads and Public Works CEC Alex Kilowua and his Trade and Enterprise Development counterpart Alvin Kimani supervised  the ground clearance.
The 3- storey market will be constructed by the County Government at a cost of Sh 120 Million.

The County Government through the Ministry of Trade, Culture, Tourism and Wildlife wishes to notify the general public that there will be a weights and measures exercise at Kitengela, Kwa Chief from 25th – 29th March 2019 between 9:00 am – 4:30 pm. The purpose for this exercise is to assize and where necessary, stamp, such weights, measures and measuring instruments within the Township/Trading center of Kajiado and a radius of twenty kilometers.

Members of public are duly advised that every weight, measure, weighing and measuring instruments used by way of trade (including sales with the weights belonging thereto scale beams spring balances, steel yard, weighing machines and other instruments for weights and measuring) must be verified and stamped annually by the inspector with a stamp of verification under the weights and measures Act (Cap. 513).

All charges in respect to the said assizing and stamping will be subject to the Weights and Measures rules.

ALLOCATION OF THE NGONG MARKET STALLS

The Ksh 800 Million World Bank-funded market in Ngong will be ready for occupation in Six months. To pave way for the construction of the market, the relocation of the over two thousand traders has begun.

The relocation exercise kicked off in earnest this week under a strict and largely transparent process that seeks to have most of the traders accommodated.

Towards this end, prospective allotters are expected to present themselves at the site with their national identification cards and validated against the list of all registered market traders.

Upon validation they will be issued with a ballot by the market committee from which they will pick a random number with a special seal which will be their allocated stall number.

The first day of the allocation will see groceries and cereal traders allocated their stalls followed by new clothes, mitumba, shoes, miraa and beba beba traders on the following day.

On Wednesday shops, hotels, malimali, fruits, charcoal and chicken traders will be shown to their stalls.

On Thursday, 28, February 2019, the market will be officially opened to the public in a ceremony to be presided over by the Governor of Kajiado, Joseph Ole Lenku and the PS State Department of Housing and Urban Development, Charles Hinga.

A number of stalls have been set aside to cater to Special Interest groups with the amenities and infrastructure within the market designed to accommodate their needs. County enforcement and security officers have been directed to ensure that all roadside traders vacate to the temporary market at Ngong Stadium once the new market commences its operations.

The County Trade and Investments Chief Officer Grace Saitoti, Ngong Ward MCA Hon. Robert Muoria together with other County officials have been instrumental in the supervision of this exercise.

The World Bank under Nairobi Metropolitan Services Improvement (NAMSIP) begun building the market last year but stalled due to a misunderstanding which was later resolved between the traders and the County Government of Kajiado over the temporary relocation of traders.

The four storey ultra-modern    market is said to be the biggest in East and Central Africa and is expected to give Ngong Town a much-needed face lift with ample parking lots, loading bays and all essential social amenities.

The Kajiado County Government through The Ministry of Trade, Culture, Tourism and Wildlife wishes to invite the general public to a weights and measures exercise whose purpose is to assessing and where necessary, stamp, such weights, measures and measuring instruments within the Township/Trading centre of Kajiado and a radius of twenty kilometers.

The exercise will be conducted on 25th February 2019 to 1st March 2019 at Kajiado Town. All charges in respect to the said assessing and stamping will be subject to the Weights and Measures rules.

The dream to construct one of Kenya’s most modern retail markets in Kajiado County nears reality.Top officials of the Nairobi Metropolitan Services Improvement Project (NAMSIP) handed over the new site to the contractor, China Tiancheng Construction Company  in a function attended by the Deputy Governor, Martin Moshisho.

The 4-storey ultra-modern market will house 2,300 traders and its construction will now begin.The relocation site is the first phase of the project and will cost Ksh 60 Million.It will be completed in the next six weeks.

The County’s Department of Trade has managed to unclog the standoff between traders and the County Government that almost frustrated efforts to have a new complex market which is expected to be the biggest in East and Central Africa.

During the launch, H.E Moshisho thanked the Ngong market traders for their commitment that saw them agree to shift in January to their temporary new market site under construction.”We shall give priority to the traders who were already there and the youth for whom we want to create self-employment job opportunities,” said the Deputy Governor.

The Ngong Market is one of the three multi-million markets NAMSIP wants to construct in Kajiado County.The others are Ole Kasasi and Kitengela.

NAMSIP Deputy Director Peter Mwaura confessed that the project almost collapsed due to traders grievances but thanked Governor Joseph Ole Lenku for intervening and whipping the traders in accepting to embrace the projects.

On several occasions, Trade and Investments Chief Officer Grace Saitoti held a series of meetings with the traders to hammer out all the pending issues.

Ngong MCA Robert Sungura assured the World Bank that the project had full support of the traders.

Overfilled crates of tomatoes and extended onion nets have been banned in Kajiado County.

The overweight crates commonly known as “Turbo” and which are packed in different weights for the Nairobi, Mombasa and local markets were banned for exploiting farmers.

CECM Jackline Koin, in a Press briefing, said the County has heard the cries of farmers and has made the decision to curb the exploitation of the farmers by middlemen.

“We have taken this decision to cushion farmers from continued exploitation. This unscrupulous practice has resulted in serious losses and affected their economic well-being of the farmers. It must stop with immediate effect,” said Koin.

The minister said a strong County inter-departmental team will be formed to implement the ban. Koin cited the provisions of the active Kajiado County Finance Act which had clearly stipulated the weights of both the big and small crates and nets of farm produce.The Act also states that the big crate is charged a levy of Ksh 70 while the small one is charged Ksh 50. “The ban sets out to standardize units of measuring and weighing products.Those defying this order will be prosecuted,” Said Koin

She also warned transporters against hiring out their vehicles to carry the overweight crates as they risk forfeiting them to the County Government. The ban will be implemented at all revenue collection points and officers have been directed to enforce the directive.

Such a ban has been successfully implemented in Taita Taveta County, one of the largest producers of tomatoes.

This will be the second ban on overweight products in Kajiado County after the County successfully standardized the weight of sand carried from the county early this year.

H.E the Deputy Governor held discussions with a team from the UN habitat; a key partner in our resolve to improve the economic capacity for urban areas in Kajiado County.
Among many other issues, they deliberated on how to prevent the rampant mushrooming of slum dwellings in urban areas of the County.
The team revealed that Kajiado will be the second County after Nyandarua to benefit from the two year project which will commence in July this year.
We have decided to earmark Kitengela as the first town to champion the project that hopes to utilize rural and urban linkages for sustainable development of within the County.
Honorable Hamilton Parseina (lands) and Honorable Jackline Koin (trade) among other County officials were present.

H.E the Deputy Governor,a team from the UN habitat and County official after a consultative meeting held at the County Headquarters.