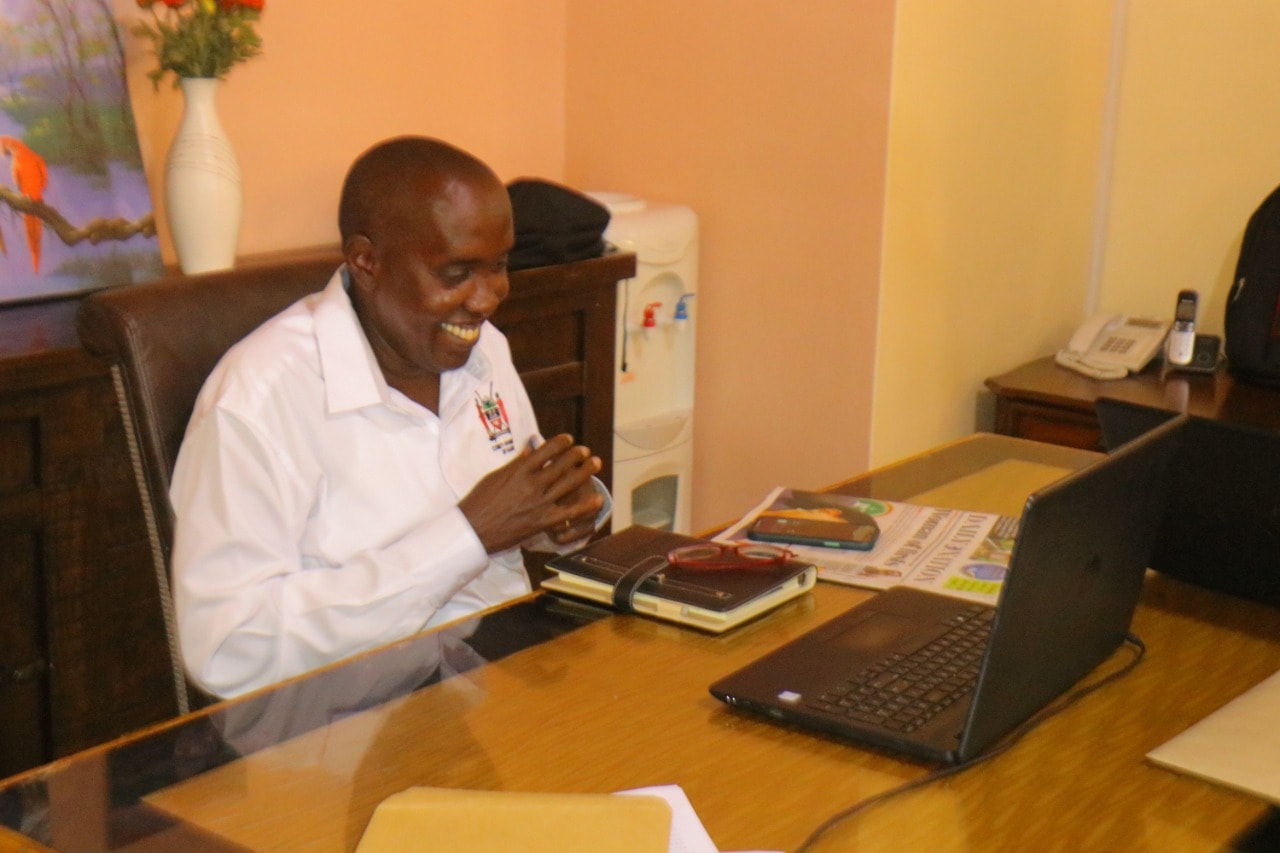 The team tabled documentary evidence on the queries raised by the Auditor General’s report with the Senators asking for further submission of documents responding to questions that arose at the meeting.

Among the queries that were addressed and whose documents were availed was the contractual agreement between the County Government and BOC Gases for the supply of oxygen to local health facilities.

The Auditor General also sought to know the items procured by Plan Healthcare Ltd to warrant a payment of Sh 11 Million in May last year.

The Auditors also sought an explanation on all the allowances paid to front line health workers which included arrears for other delayed allowances.

The Senators were also interested in the management of the County Emergency Fund in relation to urgent supplies during the COVID 19 period.

The CEC Finance also explained why he introduced and delegated a senior staff in the Department as an additional signatory to the Emergency Fund.

The Fund was largely used to purchase food supplies to vulnerable families across the County. 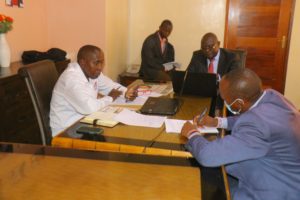 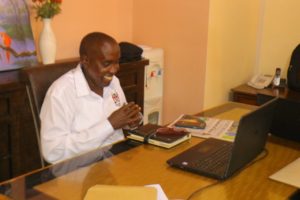 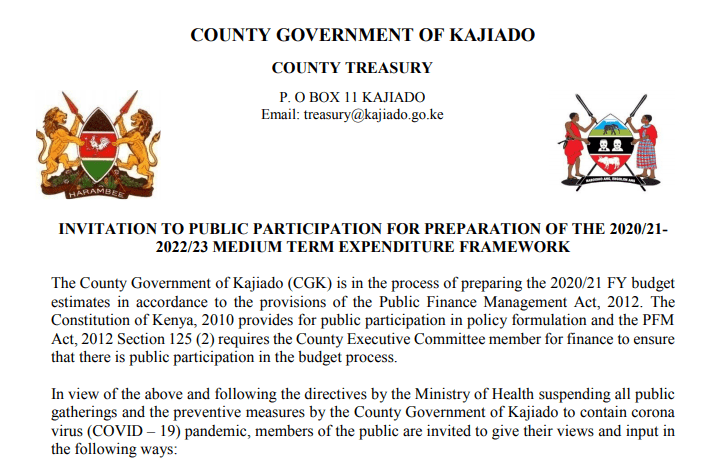 The County Government of Kajiado will pay all pending bills from contracted services by the end of June this year.
Richard Parsitau who heads a seven member committee mandated by H.E. Governor Joseph Lenku to probe pending bills in the County asked the contractors to be patient as his team streamlined all the underlying issues.
He admitted that some of the debts were inherited from the defunct Local authority adding that documentation had been the major impediment to a smooth payout process.
He assured all parties of a workable payout formula once the committee presents its findings to H.E. The Governor in the coming week.
“ I urge all of you to be patient and await a positive outcome of this process before close of the current financial year,” he added.
Parsitau who is also a Director, Governor’s Delivery Unit, GDU, further advised all those willing to engage in business with the County Government to ensure a proper inventory of all their documents so as to ease the payment process. He noted that some contractors had submitted erroneous or expired requisite documents such as tax compliance certificates and this had contributed to delays in payments.
His sentiments were echoed by Daniel Kanchori, PA in the Office of the Governor who said the County Government was determined to clear all pending bills by the end of the financial year. He advised all contractors to forward all the requisite documents through the committee to the relevant departments for perusal awaiting further action on payments.
“ Once all documents are certified and are satisfactory we will pay accordingly,” he said.
For the longest time contractors in Kajiado had lamented at the haphazard payments made by the County Government on delivered projects and services since the onset of devolution.
The situation they said had negatively impacted on their businesses as some had to close up shop due to accrued debts and high interest rates from their creditors who are majorly financial lending institutions.
“The unending bureaucracy at the finance and procurement departments at the county headquarters have further led to delays in my payments two years after delivering services to the County,” lamented a tree seedlings supplier at the meeting.
They said it was in bad taste for the County Government to make piece meal payments yet they had satisfactorily delivered their end of the bargains.
“It is uncouth for the County to float public tenders without consideration of the payout modalities once they have been awarded,” said a contractor.
The aggrieved parties requested the relevant offices in the County Government to fastrack the payment process in view that they some had spilled over from the previous government.
During the meeting at the Maasai Technical Training Institute, MTTI, members of public were also given an opportunity to share their views with the committee on the state of the completed projects in their Wards.
They highlighted that some of the projects had been shoddily done with visible cracks on some buildings and impassable roads that got even worse during the rainy seasons due to poor workmanship.
The Committee agreed to recommend among others a systemic feedback channel where contractors can track the progress of their payments, an adherence to the service charter by officers in the key departments adversely mentioned and a fully operational accounting system that can track payments and flag any pending bills for consideration.
The current financial year comes to a close at the end of June and it is hoped that all pending bills will be factored and resolved by then.

Public participation forums kicked off today in several wards across the county. The high turn up rate by residents across the County conveyed in different ward level  to budget their ward allocation kitty. In these forums the attendance of chair- Kajiado municipality, COs and other officers from several departments, residents got to discuss, identify and prioritize projects to be undertaken by the county under their ward allocation kitty.

In a bid to beat the 30th April deadline for submission of County Budget Estimates to the Kajiado County Assembly for deliberation and approval, the County Executive kicked off its public participation exercise in earnest across the County.

In most County Wards, The Stakeholders from the County met with members of the public and deliberated on thematic areas of development cutting across the various departments of the County Government.

The Public also got to learn that the magnitude of the proposed projects always dictate the budgetary allocations. That the County Assembly is duty bound to fairly dispense and equitably allocate County resources for development across the wards.

Most complains from the public were reflected on the bureaucracy in the Procurement process at the County headquarters for the delays in project implementation. Issue with contractors for not involving the community and the leadership on the status of the projects in their localities was also mentioned.

Contractors engaged in County development projects have been put on notice to deliver results within the dictated terms or face immediate termination of their services.

The office of the controller of budget has also encouraged residents at the forums to be more proactive in validation exercises of the ongoing projects within their localities to ensure that they own the process and the completed projects once handed over to them. Budgetary provisions will also be made to conduct a feasibility study in most projects to ascertain their status.

Further, county departments have been challenged to institute stringent measures which should include formation of oversight committees to monitor and evaluate the projects to ensure that allocated public funds are utilized for the intended purposes. The Committees would thereafter submit their findings for possible termination of contracts and black listing of non performing firms.

The Public Participation exercise which is going on across the County in all wards ends of Friday is guided by the principle of reasonable access of information related to policy formulation and implementation. It is these that form the basis of approval of development projects and budgets and granting of permits and establish emend of specific performance standards as dictated in Chapter 87 of the County Government Act,2012.

DEVELOPMENT SHARE AUGMENTED AS THE COUNTY IS SET TO ADDRESS FOOD SCARCITY.

Kajiado County Assembly has passed the 2018/19 budget estimates of shs.9,514,040,462 as presented by the County Executive Committee in charge of finance, Michael Semera. The budget estimates is increased from Sh.6,234,157,864 in last financial year.
The County Assembly lauded the CEC finance for increasing the development budget from 30 percent to 34 percent for the purpose of improving the livelihoods of the people. Kajiado County Assembly Speaker, Hon. Johnson Osoi, said the budget had unique features that will go a long way in seeing larger population of Kajiado benefit.
“This budget has the public at heart with unique ways of addressing the various challenges like food scarcity and improving the development allocation upwards which is key,” said Hon. Johnson Osoi.
“We are scaling up food production to fight continuous famine in the County by introducing household agricultural production. We are also revamping livestock production by allocating sh.96million for the purpose of hay production, ” said Michael Semera, adding that the allocation for livestock pegged for sh26million will be used to support dairy farming across the County.
The CEC finance also said that to tap into local youth talent the government has allocated whooping sh.30million to help in completion of the Ngong Stadium. He said youth and women have also been allocated sh.15million for the purpose of supporting their economic ventures.
Semera assured the Assembly that revenue collection will be scaled to sh1.58billion.
“We call for efficient implementation and fairness in award of contracts, the companies considered need to be properly supervised and deliver as required for the sake of the people, that is what is considered development,” said Hon Moses Saoyo Kusero.
Hon. Onesmus Ngogoyo lauded the CEC finance for increasing the development allocation to 47 per cent up from 30 per cent.